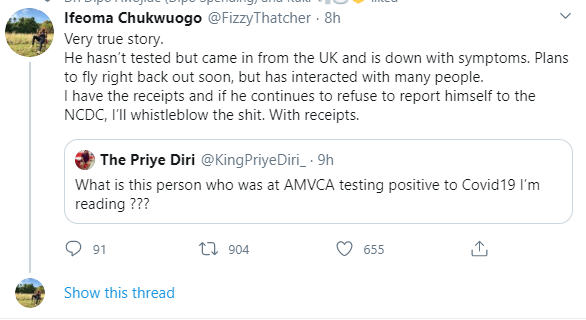 A documentary producer has warned of a person with a suspected case of coronavirus who might have attended the AMVCA and interacted with a number of Nigerian celebrities.

Ifeoma added that this man interacted with “many people” at the Award ceremony and she has “receipts”.

She later revealed that she has now made a call to the NCDC helpline.

She advised that everyone who attended the AMVCA should self-isolate.

Film producer Priye Diri wrote: “What is this person who was at AMVCA testing positive to Covid19 I’m reading ???”

And Ifeoma responded: “Very true story. He hasn’t tested but came in from the UK and is down with symptoms. Plans to fly right back out soon, but has interacted with many people. I have the receipts and if he continues to refuse to report himself to the NCDC, I’ll whistleblow the shit. With receipts.”

She later added: “UPDATE: Called the NCDC help line. Spoken to a rep, provided preliminary information. Will follow up first thing in the morning. Only delayed on calling for some hrs to properly verify some info first. Because didn’t want to 1: clog phone lines and 2: give wrong info.”

She then issued a warning, writing: “In the meantime, if you attended the AMVCAs , please self isolate immediately. If you have come in close contact with anyone who did, to be safe also self-isolate and watch yourself for some days.

“Nollywood needs to shut down productions, I hear some producers are refusing this and honestly nothing is worth that Yes, there’ll be major financial losses and it really sucks but it’s happening globally, that’s life as we know it now. We’re in the middle of a freaking pandemic.”

Another Twitter confirmed this, writing: “Yuuuuup. Very legit story. Got this from his friend who sent to me; Said it’s been reported to news, AMVCA, so they can handle. Also mentioned first hand cases of folks in industry being sick on set, forced to work, etc. Best to assume contact and self quarantine.” 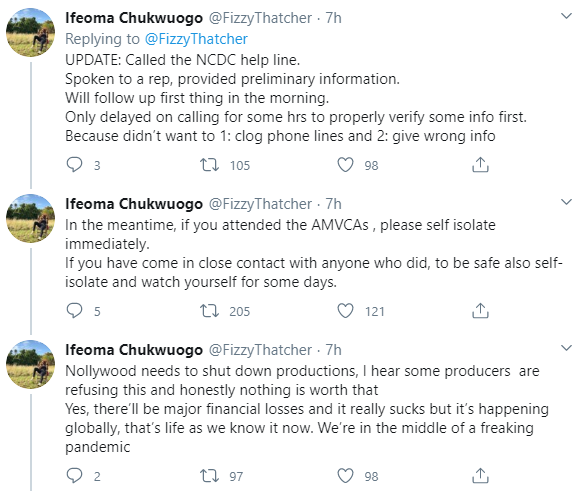 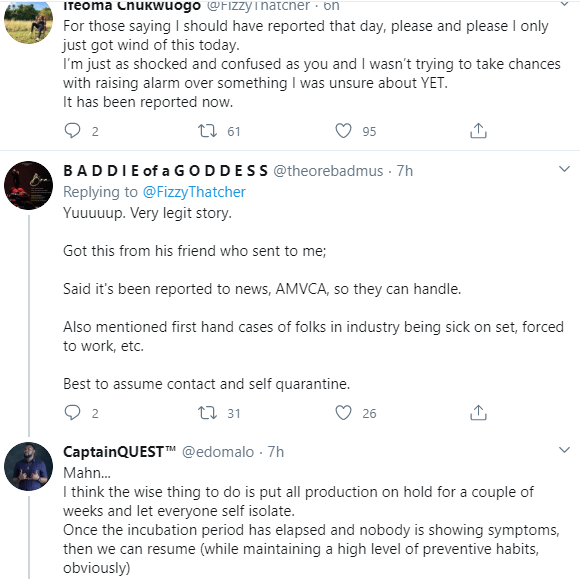