6 Chinese Nationals have been arrested by the Ugandan police for fleeing from designated quarantine centres for coronavirus in the country.

Police Chief Political Commissar, Asan Kasingye tweeted about the arrest of Chinese nationals who had reportedly escaped from designated quarantine centres. He revealed they were arrested in Zombo District enroute to Democratic Republic of Congo.

“Eight Chinese who had escaped from quarantine have been arrested in Zombo, enroute to DR Congo. They will be charged in our Courts of law.”

Minister of State for Primary Health Care, Dr Joyce Moriku Kaducu who confirmed the arrest on Sunday March 22, said only 6 Chinese nationals were arrested in Zombo for excusing themselves from quarantine before 14 days. She further revealed they will be arraigned in court today March 23, in Nakawa.

The 6 Chinese nationals who were arrested in Zombo for excusing themselves from quarantine before 14 days, have been returned to Kampala today. They will be tried tomorrow in Nakawa. This is not a drill. Uganda has taken drastic measures that EVERYONE is expected to follow.

Their passports have been withheld until after the Court ruling. I hope the other people under quarantine can learn from this experience and follow the guidelines given. Please stay safe and stay vigilant. 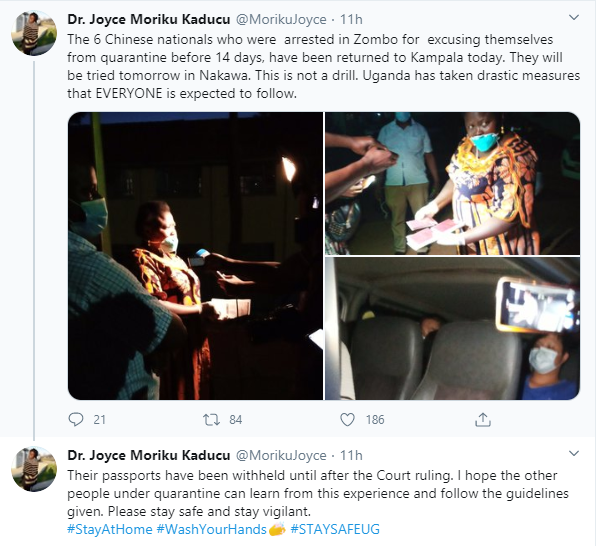