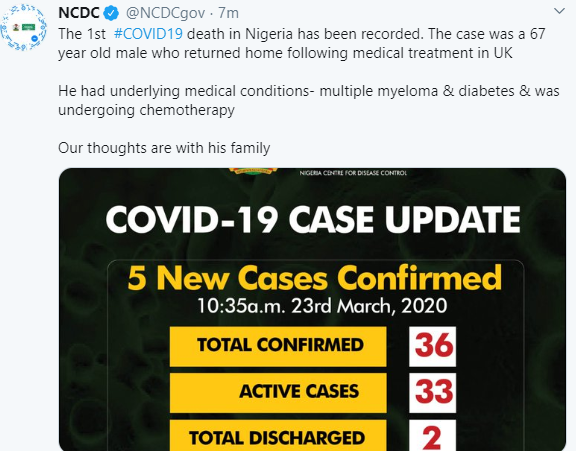 Nigeria has recorded its first death from coronavirus.

The Nigeria Centre for Disease Control (NCDC) confirmed the death in its update on the virus on Monday.

The victim, Suleiman Achimugu, former managing director of the Petroleum Products Marketing Company (PPMC), died at 2am on Monday.

The deceased, an indigene of Kogi state and 67, was said to have returned from the United Kingdom two weeks ago.

He was said to have started exhibiting the symptoms of the virus on Tuesday and the case was reported to the NCDC who took his blood specimen for a test.

He tested positive and was evacuated to the specialist hospital, Gwagwalada in Abuja but died while receiving treatment.

According to a source, his family members are reportedly under quarantine at their home.

A statement from the family issued by Abubakar Achimugu said the deceased had been buried according to Islamic rites.

”Our family is deeply saddened to inform you of the sudden death of our beloved Father, Uncle, Brother and friend. Engr. Suleiman Achimugu (former Md of PPMC),” the statement read.

”He died of COVID 19 on 22/03/2020 some days after he arrived Nigeria from the UK. He was in self isolation upon his return from the UK and personally called NCDC after experiencing some discomfort that are related to COVID 19 symptoms.

”He tested positive and was promptly evacuated to the specialist hospital. He died while receiving treatment.

”We implore the general public to pray upon his soul and the recovery of infected persons .Your thoughts and prayers would be appreciated.

”Please maintain the public social distancing and restriction advice as we all walk through this very difficult time.He has since been buried according to Islamic rites. May Allah SWA have mercy on him.”