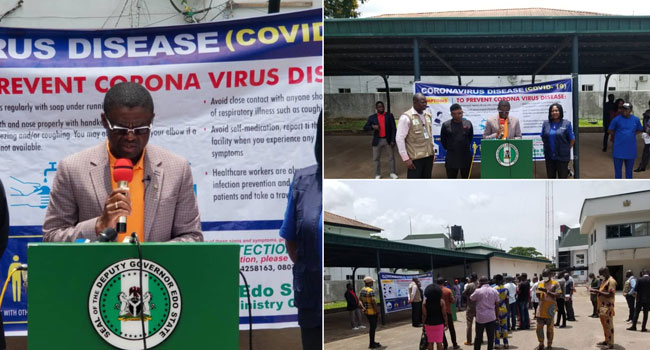 Mr Frank Okiye, the Speaker of the Edo State House of Assembly, has tested positive for the novel coronavirus.

The Deputy Governor of the State, Phillip Shaibu, disclosed this during a press conference in Benin, the state capital on Wednesday.

Mr Shaibu confirmed that Okiye is the recorded index case announced earlier by the state government.

In a statement, Special Adviser to the Governor on Media and Communication Strategy, Mr. Crusoe Osagie, said the governor has sent his samples for testing.

This move the governor said was necessary following his close contact with the Bauchi State Governor, Bala Muhammed and Chief of Staff to the President, Abba Kyari, who have both tested positive for COVID-19.

There are currently 46 cases recorded in Nigeria.

Two new cases of the COVID-19 were confirmed in the early hours of Wednesday.

According to the Nigeria Centre for Disease Control (NCDC), one additional case was found in Lagos State while another was discovered in Osun State.

A statement by the NCDC reveals that both cases are travellers who returned to Nigeria in the last 7 days.